After three months of working outside of Mexico, I was so ready to come back, ready to do what we do, instead of just talking about it. Sitting on the plane Monday morning high over the Gulf of Mexico, I felt euphoric about coming back. I was ready to get back to our well-balanced daily routine and our exciting projects.

When we arrived at our house in Toluca, our dogs greeted us enthusiastically. Friends stopped by and invited us over for a welcome home lunch. It was good to be home.

The house was dark and smelled different; “it always smells different after someone else lives there,” I reminded myself. “After a few days of having the curtains and windows open it’ll be back to normal.”

The house was full of suitcases and it began to fill up even more as we started digging through them to find our toothbrushes, deodorant and the assorted “travel schwag” we had brought for friends. “Let’s try to get everything put away as soon as possible,” suggested Tim. “Before we start working and catching up on all the e-mail waiting for us, let’s get the place in order.”

The carpet in the guest/exercise/tv room was filthy. “We have to get the carpets cleaned soon,” I told Tim. When we’re in there we’re usually barefoot or I’m in my exercise shoes that I don’t wear out on the street. Nahum (who house-sat for us) stayed in here so I’m sure it got dirtier from more use.

Maria (a trustworthy and needy lady we employ once a week to help us around the house) came on Wednesday. By the time she left the suitcases were put away, the house was clean and in order, except for a few pockets of resistance: papers in the office, books in the living room, a pile of clothing for the dry-cleaner, assorted odds and ends that need to be wedged into the remaining crevices of our 600 sq. ft house.

To celebrate our progress we took our golden retriever, Spike, up to the foothills of the volcano outside of town for a good run. He loves to run and when we watch him run it give us joy. He was created to run.

While we hiked, Spike dashed up the dirt road, or off amid the tussocks of high altitude grass. Usually we either catch up with him when he stops to mark his path or he circles back around to us, but when we were about halfway back to the car, we stopped and called him because we hadn’t seen him for a while. He didn’t come and was nowhere to be seen. For 20 long minutes Tim retraced our steps, calling for him, while I sat watching the path below in case he had gotten past us. 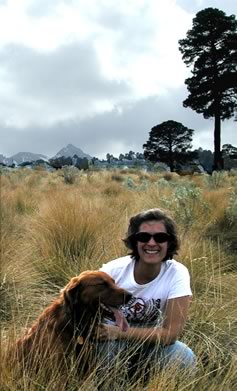 I really thought he was gone. At one point I stopped asking God to let us find him and just asked if He would please let him find some farmer there on the mountain who would feed him after we had gone home. As Tim walked up one final gully, Spike came bounding up to him, unaware of our concern or of his near fate.

Our third day home should have been Day One of being back in the groove. But instead of being eager to get to work, I felt drained. “It’s the letdown from the trip; it’s the altitude (you can always blame anything on the altitude when you live at almost 9,000 ft); it’s jet lag (we had been in Spain less than a week before); it’s PMS,” I told myself. All of those seemed like viable scapegoats and the good thing about each of those is they have an end. They all go away and when they’re gone, you’re fine. But I sensed that none of those were at the true root of my ennui.

The near loss of our fifth dog in eight years, the endless chore of getting and keeping things in their place, the unconquerable dust of the dry season, which will be followed by the unconquerable mud and mold of the rainy season, are weighing me down. In Romans 8:21(NIV) I found the phrase that exactly described what I felt, “bondage to decay”, a result of Adam’s Curse. Everything around me is constantly decaying -- getting dirty, falling apart, tending towards disorder (my family nickname was sometimes “messy Bessie” so I guess I’m particularly “decay prone” J). The direction of my life cannot be a straight line of upward progress because I am bound to this decaying body and this decaying world.

Usually we face this entropy in small bits. We wash the dishes after each meal, not at the end of a week. Coming back to Mexico, however, I faced disorder and degradation everywhere. Just thinking about the endless battle for cleanliness, order and progress wore me out.

I pulled out my Interlinear New Testament to find the Greek word Paul used for this decay (what can I say, I love to research and study) and made a delightful discovery. The NIV of verse 21 reads, “…the creation itself will be liberated from its bondage to decay and brought into the glorious freedom of the children of God” but in the Greek there is a beautiful parallel construction: “slavery to decay”, “freedom of glory.”

The idea “glory” is hard to get a handle on. Glory is definitely positive, but somehow very abstract. It has always seemed more like an adjective than a noun, more like the glow around something than a thing itself. But the Bible definitely uses “glory” as a noun. RC Sproul talks expressively about the “heaviness” of glory and C.S. Lewis wrote a definitive essay called “The Weight of Glory”.

I’ve been thinking about glory lately. Our second night in Spain Tim and I had jet lag, bad. We had been lying in bed for hours (not an exaggeration, I saw them tick away on my backlit watch) but we didn’t want to turn the lights on for fear of delaying the resetting of our bodies’ internal clocks. “Why don’t you go over some of those long passages of the Bible that you’ve memorized”, Tim suggested. I decided to start with Psalm 1. My grandparents taught this to me when I was about seven and they were staying with my sister and I while my parents were in Liberia for a month.

“…Do not stand in the way of scoffers, or sit in the seat of sinners…”. The alliteration drew me in.

“But his delight is in the law of the Lord and on that law does he meditate day and night.” I was still trapped in sleepless exhaustion but felt deep joy somehow, knowing that I was doing just that; I felt connected to the great king David who would lie in bed and think about God’s word.

“He is like a tree planted by rivers of water which yields its fruit in its season.” I had always like this image of the tree and its fruit. “Season” means that the tree does not always have fruit on it but when the time is right the fruit will appear. That is a comfort to me because I get thinking that I need to see fruit all of the time, and preferably lots of it. But this image says that if the tree is drawing from the streams of water the fruit will be there, when the season is right,

“…Not so the wicked. They are like the chaff that the wind blows away.” I pictured the empty shells of the wheat being blown away. I thought about the “lightness”, the unsubstantial-ness, the worthlessness, of those husks. I thought about the desperate horror of having a life with no “weight”, a life whose results blow away leaving no trace.

I have never been worried about “leaving my mark” on the world. I don’t recall carving my initials on things; I don’t care if future generations think of me. (I figure I’ll be dead so what good would it do me anyway.) I don’t have children, so I won’t even pass on my genes. However, I do believe that God has used me for good in other people’s lives. I believe that in heaven one of the great joys will be seeing and celebrating what God did through our prayers and through us. Then we will finally see our fruit, fruit that is eternal and “weighty.”

Sometimes I struggle to feel the “good” part of the Good News. I asked Jesus to be the Lord of my life when I was 4 ½ so I don’t have a personal experience of radical transformation to look back on. But as I feel bound to the decay of this world, the promise of release is good news.

With these thoughts running around in my mind, we went to church where we took communion. I was struck by how bread and wine are examples of the way something’s decay can be transformed into it’s source of glory. Like good Mexican Protestants we use grape juice, not wine, during communion. But even a teetotaler can appreciate on a symbolic level that wine gets its value from the process of its decay. And Jesus was explicit about the decay needed for wheat to reach its potential: “I tell you the truth, unless a kernel of wheat falls to the ground and dies, it remains only a single seed. But if it dies, it produces many seeds.” (Jn 12:24) (Of course most bread also is made with yeast, a biblical symbol of decay.)

As I have gone down this mental path, facing the decay around me and seeing the door open to glory at the end of the road, I have experienced hope and joy. I understand a bit better the “abundance” of the life we have in Christ: “…Christ in you the hope of glory…” (Col. 1:27). And I am grateful, grateful for the joy of seeing spiritual truth more clearly and grateful for the “freedom of the glory of the children of God.”

But, as Lewis says in “The Weight of Glory”, “Meanwhile the cross comes before the crown and tomorrow is a Monday morning.”

Tomorrow really is Monday and I still have those piles of papers, books and clothes to face. (Did I mention I’ve had wash in the dryer since Thursday? I’m thinking I should deal with that too. ) I hope that understanding what I’m up against helps me face it better. Or at least that my body gets used to the hour and the altitude.