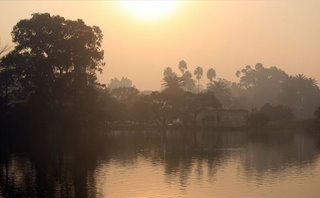 Like a dreamy impressionist painting, but that
romantic mist is actually nose-clogging smoke

This is the park where we exercise

Annette is not deterred by the brown layer of air

I took this in the street in front of our apt.
(Click pics to see them BIGified)

From the roof of our apt. building this morning
I blew my nose the other night and... well, let's just say there has been A LOT of smoke in the air. We returned from our twice annual team retreat and as we were about to land in Buenos Aires the woman in the seat behind us said loudly, "No one told me that the pollution is so bad here. I think I'll go to Uruguay." I looked out the window and could see a layer of cafe con leche colored air just below us that was so thick I almost thought we'd feel a bump as the plane passed from the clean into the dirty layer.

There was no *bump*, but as we left the airport we smelled smoke so we did a Google search of - fire, Buenos Aires, pollution - but we got nothing. Now, a week later, the fires and resulting blanket of smoke are all over the news (http://news.bbc.co.uk/2/hi/americas/7353595.stm) and I can no longer distinguish the taste of turkey from smoked turkey (an alarming side effect - ha ha).