Both Amigos and Friends 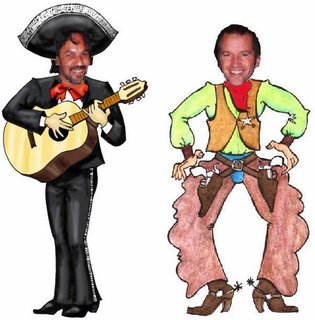 One of the better gifts we've received arrived yesterday in our email inbox. Click here to take a look.

[Note: For the English version, you need to scroll down the page but don't miss the hilarious fotos at the top.] 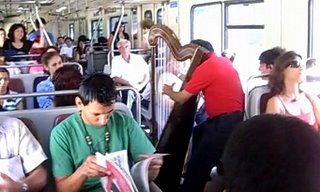 [Week 4] Annette and I are on the train going into downtown when a man gets on carrying a harp... a BIG heavy harp. I feel sorry for him. It must be a precarious situation travelling in a lurching train with such a large and valuable instrument. I imagine that that he is on his way to the philharmonic or a music school. So I'm surprised when he sits down on the arm of a seat and begin to play.

It was surrealistic - a roving, public tranportation harpist!? He played two songs, bowed, we all clapped and dropped coins in his satchel. Later as Annette and I exited the train, we saw him playing anew in the adjacent train car.

Due to the sound of the train, it's hard to hear how well he played, but click here to view part one and two of the video + a few more photos from week four. 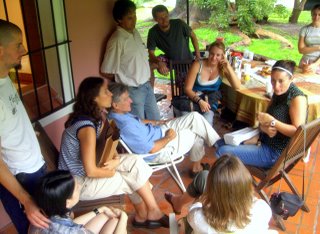 [Week 3] We stayed up talking with friends until after 1:00 A.M. and then got up early to be available for the delivery guys who were supposed to - but never did - bring us our mattress.

For the last four nights I've missed dinner (unless you call crackers and tea dinner, which Annette does) and we seem to always be eating breakfast around lunchtime.

It's still summer here, but for the last week it has fluctuated between hot and sunny and cool and rainy (March is the rainiest month in Buenos Aires), sometimes in a 20 minute time span, making it hard to know what to wear when we leave the house.

These aren't complaints, just observations that illustrate how Annette and I haven't found a rhythm yet in our life here. But life is anything but boring. For example, we had Sunday lunch beside the Plate River with a wonderful Argentinian family who lived in Mexico for several years. As they droppped us off at the craft fair near our home we ran into our housemates, Memo & Janelle, who were with two girls from Scotland who are ambasadors for World Without Walls. We joined up with them and were captivated and profoundly encouraged with the stories they shared as we toured the craft market, ate the largest ice cream cones we've ever seen, and had afternoon tea with more friends.

Our afternoon was only slightly affected by heavy rain --we moved our chairs further under the porch overhang and periodically commented on the odd redish lightining-- so we were surprised to hear later that it had caused flash flooding and even two tornados/water spouts. (continued below...) 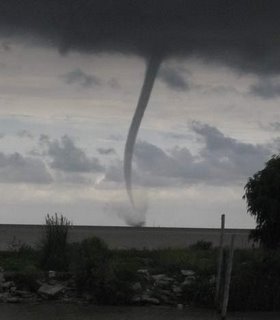 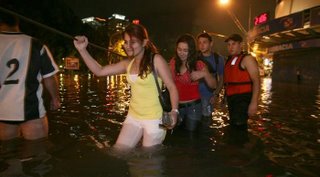 Right now my heart is full... this life God has allowed us to live is full of surprises, amazing relationships, purpose and hope. Annette and I are so aware of how much we owe to those of you who we're connected with and who make this work and life possible. Now all we need to do is figure out when to sleep and when to eat.

You may not have noticed but we've changed from being mexikids and are now argenteens. In a related development, our blog was renamed ARGENText and the wonderful but now retired MEXItext is enjoying a siesta.