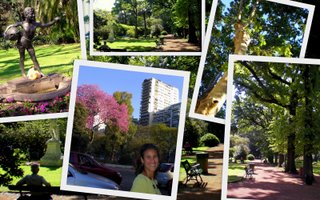 A French landscape architect named Carlos Thays helped design the parks and walkways of Buenos Aires. His botanical gardens as well as the 61 acre series of parks called "Palermo Woods" are within walking distance from the apartment we've been loaned. As you can see we're thoroughly enjoying Spring down here. 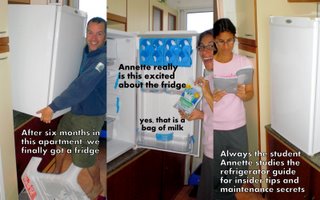 We didn't want to have a fridge sucking electricity while we were gone for weeks, but now that it's warm enough to curdle our long-shelf life milk, we broke down and got one. It's tiny but has enough room for leftovers and bags of milk. (One of the disciplines of urban living is letting the grocery stores -- there are at least seven in a two block radius -- store our food until we need it.)

Our nephew Logan was home sick one morning we decided to Skype. Here Annette is helping him do some math: if there are twenty students in your class and only fifteen of them came to school because the rest were sick, how many students were sick? 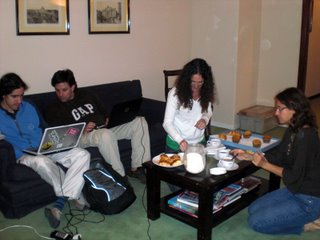 Now that all the members of the youth workers institute team are actually in the country at the same time, things are moving forward. If you're interested in a vignette about this week's lesson to remember, click here. We also learned that the baked goods from our favorite french bakery aren't called "bread" because here "bread" is what you use for sandwiches or toast. Maybe someday we won't feel chronically ignorant...maybe :-)

You guys continue to amaze me! So lovely flicking through your pics seeing familiar faces and sights! It makes my heart warm inside knowing that we are part of such a wonderful community...even from the other (freezing) side of the world I thank God that you are my family! Blessings, kisses and cuddles to you both!
Erica x