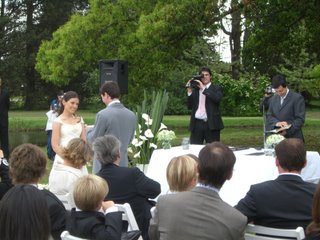 "We're here today to celebrate the marriage of Terence and Noelia, who in the last three weeks have gotten more national press coverage than any couple I can remember…and definitely more than many who seek the spotlight," said the pastor, Gerardo, at the beginning of the wedding service.

Several radio and television programs had interviewed them and the day before the wedding their story was on the front page of "La Nacion," a leading newspaper in Buenos Aires, Argentina:

Local Couple's Unique Gift Registry
When Noelia and Terence decided to get married they had a dilemma they weren’t sure if their wedding guests would understand. They wanted to have an amazing party to celebrate their decision to unite their lives, but they didn’t want gifts…As they explained on their web page, "We have everything we need...and we don't want to acumulate more stuff" so they decided to open a bank account and donate what was collected to a foundation that works with children with cancer. (Click here for full article in Spanish)

And as Terence said in the television interview:

We asked ourselves why would we want stuff that we don't even have space for... and like the Bible says, it's better to give than to receive.

At the time of the wedding the equivalent of $20,500 USD had been donated ($1500 of it by a complete stranger who wanted to join in when he heard about the project) and four couples had written to Terence saying that they are going to do something similar.

We care about this story because Terence is a close friend and a volunteer youth leaders at St. Andrew's Presbyterian Church in Olivos, our church family in Argentina. We met him years ago when Daryl Heald of GenerousGiving.org visited St. Andrew's and spoke about the joy of generosity. Few people believe that it really is better to give than to receive, but Terence and Noelia get it. What a great foundation for a marriage.

That's a really cool thing. I was encouraged to read about the marriage being such a model of generosity.