After much deliberation, the textbook on youth work and accomanying animated classes that Annette and I have been developing with a team of people for the last 3½ years is going to be published by one of the Spanish-language divisions of Harper-Collins.

In the photos (click for biggie size) you can see Annette with Lucas Leys, the director of Youth Specialties - Latin America. Even though the top two pictures were obviously staged, there was some haggling over the project. Lucas drew the line at 300 pages (down from 380) so the appendix, worksheets and the classes that we had envisioned on an interactive CD will all be available online. This makes them for the youth leaders but less costly for the publisher.

For all of you who were praying for this meeting, thank you! We feel good about the end result and hope this help get the material into more leader's hands. 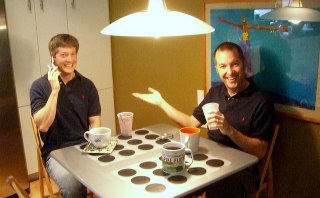 Rick and I go way back. As we caught up over breakfast, I was surprising how much history we shared. Our parents are friends, we went to the same church, car-pooled to school in junior high, ran on the same track team in high school, went to the same college and graduated with degrees in philosophy, the same graduate school, and as you can see in the photo, we unfortunately even wore the same shirt.

And yet as similar as that should make us, it's amazing how different our lives are... we hadn't seen each in 12 years, he is an attorney with two law degrees, has lived in St. Louis, Los Angeles, and now Atlanta, he's single, doesn't like coffee, and - on this occasion - was wearing jeans whereas I was looking particularly Republican in khakis.