What Annette's Book Is About

Every time someone asks what Annette's book is about it takes like 10 minutes to explain. So one late afternoon while we were in Buenos Aires she took a break from writing the rough draft and just read us a bit of it. In short, Annette develops three metaphors for the church - a monument, a weathervane and a compass - creating a framework for dialogue about its role and function. 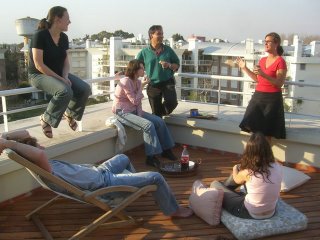 If you want to view the video, click the play button above. You may want to turn up your volume....The audio is a bit weak since we were recording this with a tiny point-and-shoot digital camera on the roof of our friend, Terence's, apartment. 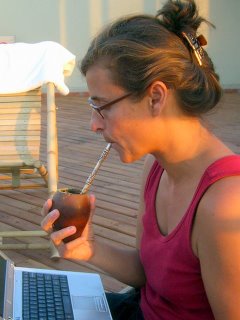 After viewing the video clip, you are probably wondering what Terence is holding in his hands (same thing Annette is sipping on in the photo)...the brown thing is a gourd and the metal pipe thing is a silver straw with a filter on the end. These are the accoutrements which accompany the traditional Argentine drink called "yerba mate." It is hot, shared among a group of people in a very specific manner, has a caffeine like stimulant, and tastes like alfalfa (or just plain grass). 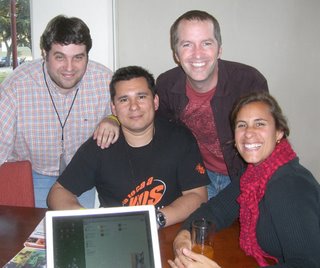 We just got back to Buenos Aires after being in Mendoza, Argentina for the Youth Specialties event. There were 2400 youth leaders. It was the best yet. And the time with friends, other speakers and youth leaders all over South America was incredibly fun and stimulating. 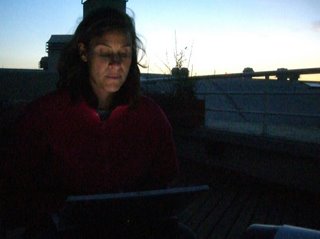 Yesterday we had a meeting with the director of Editorial VIDA (Christian Spanish-language division of Harper Collins) and he seems very positive toward the idea of publishing the textbook that Annette helped write and edit over the last 3 years.

Annette just finished her first day of writing her book and is already into the 2nd chapter! The photo of Annette is her on the roof of the apartment here in Buenos Aires reading the 1st chapter outloud to Terence (our host), Chase Heavener and me.