In the U.S. but with Mexican Tags

Howdy. I just wanted to let you know that we've made it safely to the U.S.

We ended up leaving Mexico City 4 hours late due to car problems. It was Thursday the 16th at 2:00 p.m. and we were still singing songs from the U2 concert the night before. We arrived in Monterrey, Mexico 9 hours later where we stayed with a girl from our youth group in Toluca who had recently gotten a job as a lawyer in Monterrey. Friday morning we crossed the border at Nuevo Laredo/Laredo, hit awful traffic at San Antonio and Austin, Texas in the afternoon and spent the night in Waco (where Annette went to college). We arrived in Wichita, Kansas early Saturday evening and Sunday we spoke 4 times at the church that Annette grew up in. 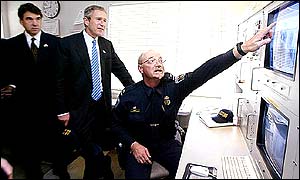 [Agents checking our crossing at the border]

We were a bit anxious about the border crossing but - like getting a shot - it was mostly painless. We did get pulled aside for a random search of our car, but the whole waiting in line on the bridge over the Rio Grande, talking to the customs agents and search process only took 21 minutes.

The friendly Texan agent searching through all our worldly possessions which were crammed into the back of our truck said, "We don't get many American's crossing into the U.S. in a car with Mexican tags...usually it's the other way around." Deep down inside I get pleasure from the thought that a policeman somewhere might pull us over seeing our Estado de Mexico license plate as a sign of illegal entry into this country. That should make for an interesting conversation :-)

We hope to arrive in Orlando, Florida the 1st or 2nd of March. 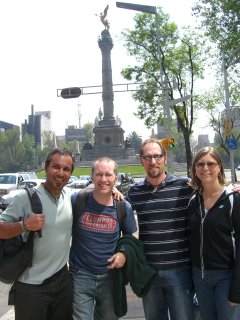 Our final hours in Mexico were an appropriate ending to this chapter in our lives. More than a week before our departure date, we took our car in for an oil change. Unfortunately the mechanic damaged the motor. So, in the midst of our final packing we were also scrambling to get it fixed by a more trustworthy mechanic. Trustworthy, yes. Timely, no.

Our friend Memo Bernaldez (left of me in the picture) did us the incredible favor of taking our already packed car to and from the mechanic all the while keeping watch over its contents — so we could enjoy the concert with our friends.

Since by this time our house was empty, we all stayed at a hotel in Mexico City and had planned that Memo would bring us the car on his way to an appointment at the Argentine embassy. But he called us early the morning we were to leave to say that the mecanic was running 24 hours behind schedule and the car wouldn’t be ready in time. He was stressed, we were frantic.

To make a long story longer, instead of leaving at 9:30 in the morning as planned, we left at around 3 p.m. But we had a nice breakfast with Kyle & Nell (at right in photo) and got to see not only Memo but also his sister, Adriana, and her husband (who ended up driving our car into the city for us).

As we drove off into the proverbial sunset, we were vividly aware of the best and the worst of life in Mexico: the infuriating frustrations of things that don’t work the way they should and the overwhelming kindness of people who put their life on hold to help you.

U2 in Mexico City 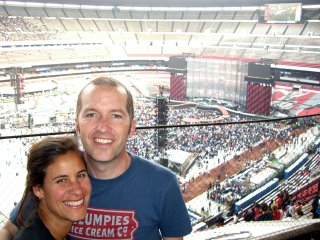 The 6 of us (see previous post) arrived at the Aztec stadium at 4:00 even though U2 didn't start playing until 9:30 that night. It's one of the 3 biggest stadiums in the world and though we couldn't really see the band with the naked eye, it was still fun to sing those great songs along with 80,000 other people. (If you're interested in the song list, photos and reviews from this concert, click here.) 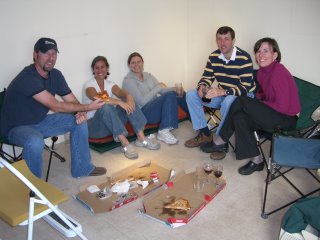 This is a photo of the last meal in our house in Mexico. Two couples, Kyle and Nell Stiff from Guatemala (on either side of Annette), and Hill and Susan Davis from South Carolina had flown down for a couple of days to help us empty the house and pack our car. The night of this photo, we slept on the floor and the next day we all went to the U2 concert in Mexico City. It was a terrific finalé to our time in Mexico, and we're grateful to have friends like these. 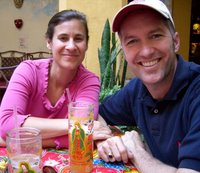 Next week we begin our first ever drive toward the U.S./Mexico border. We will be saying goodbye to our beloved Mexico, but not until after one last hurrah at the U2 concert in Mexico City. Some friends here got us tickets and we have friends flying in from Guatemala and the United States to go to the concert with us. What a great way to end our time here!

If you're interested in our itinerary between the time we leave here and arrive there, click here for all the gory details. 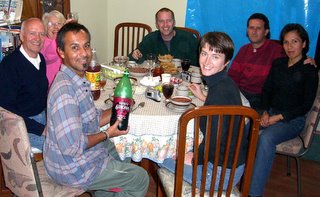 Here's the secret to never having to cook again: a) live somewhere 10 years; b) announce you're leaving for good; c) then wait for friends to invite you over for "one last meal". I've noticed if you don't actually leave the invitations for breakfast, lunch and dinner begin to diminish after about 3 weeks :-)

The picture above is from one of the many meals our mexican friends have lavished on us in the last few weeks of our time here in Mexico. Lucky for my parents (top left) who came just at the right time for free, home-made mexican fare. 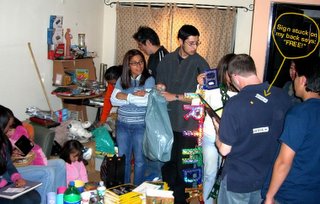 As you can see in this photo, a bunch of the kids from our local youth group came over to help us sort and price our stuff. They turned it into a party, my mom baked chocolate chips cookies, the kids ended up buying half the stuff, and generally made us feel loved. A longtime friend, a college student, bought our small stone coffee table and said he just wanted "a piece of the house" since it had such good memories. (click the photo to see the big version) 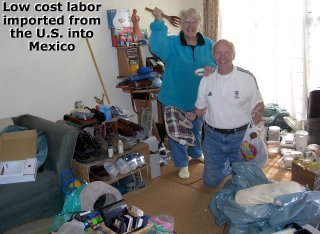 As you can see in the photo, we imported low-cost/no-cost labor from the U.S. to help us sort and pack our stuff. Thanks Mom and Dad.

Pretty much everything we own here in Mexico will be sold off at a yard sale or given away to friends. Tomorrow night a bunch of kids from the youth group are going to come over to help us put prices on everything from wireless networking equipment to wooden salad forks. In a couple of weeks when we drive across the Mexican-USA border, we'll have simplified our life down to one laptop, a few pieces of artwork, a knife, a fork, a spoon, and some clothing.