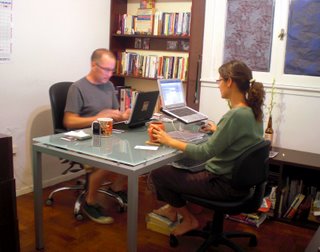 Sometimes i stand back and marvel at this odd life where we are in constant - sometimes frantic - contact with so many people, in so many places, working on so many different projects nearly simultaneously.

A camera in our 10 ft x 10 ft office would just show the two of us sitting in silence, eyes glued on the screen, typing furiously (and me occasionally getting up to make tea, or go to the bathroom or look something up in a book).

But I'm working on an article with a text editor in Chile, a managing editor in Guatemala, an artist in Mexico and a magazine designer in Argentina while Tim talks with a Mexican about an upcoming event in Costa Rica, works with a web designer in Uruguay and a programmer in Argentina for the online registration process for the school for youth workers here in Buenos Aires and Guatemala. And those are just the major projects during part of one day. It's a good thing we don't have to pay for our internet by the minute :-)

This work is licensed under a Creative Commons Attribution-Noncommercial-Share Alike 3.0 United States License
.