At 10 p.m., exactly 12 hours before we'll walk out the door en route to Mendoza, Argentina for the Youth Specialties International Convention, Annette exasperated with having to pack yet again, walks into the office and says,

For a while i thought I was getting better at this traveling thing, but now I realize that I'm just becoming apathetic. Maybe it's like having your fourth child, you're not really a better more experienced parent, you're just too tired to care any more. 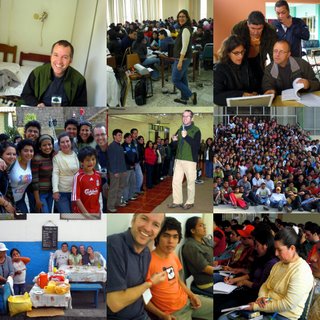 “Well,” he said shaking his head as he printed our boarding passes, “You’re going to have to run. Once the gateway doors close we can’t open them again.”

I thought he was speaking metaphorically, “You need to really hustle”, but, no, he meant literally that to reach the gangway in time we would have to run because the gate, number 13 which we’d never flown out of before, was in another terminal about a half a mile away.

The next thirty minutes were incredibly tense. How we got through them is a whole other story. (click here for the full story)

A few days into our time in Peru I saw that just like we’d gotten lulled into complacency about travel, we’ve gotten used to smoothly run conferences where we know what is expected of us and how long we have to teach weeks before we arrive. Not so in Peru.

The day before the conference began, we were told of a previously unstated expectation that we would - that very night - prepare 50 conference volunteers. "You have 90 minutes," they announced. Needless to say we scrambled a bit but it worked out. 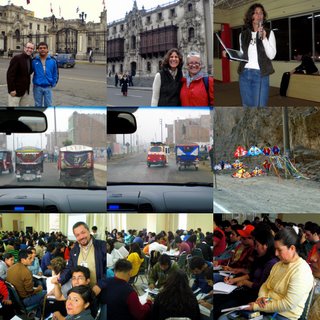 The conference stood out in some positive ways too. For example, this was also the first Raíces event where we were given time to facilitate some learning activities we have been developing over the years. We’d never done them with such a large group so there were times when we felt overwhelmed by the chaos but feedback from various leaders reminded us that creating ways for learners to engage experientially with the material is worth the chaos.

Despite the emotional rollercoaster of the conference, we have no doubt that it gave both vision and tools to those who attended it. One cell group leader said, “We thought we didn’t need any more training, but this weekend I’ve seen that there is still a lot we need to learn.” And the organizing committee asked us to return and help them teach it throughout the rest of Peru. But now that they have with the book, the animated classes, and a new crop of trained leaders they have the tools to accomplish that goal whether we make it back or not.

This work is licensed under a Creative Commons Attribution-Noncommercial-Share Alike 3.0 United States License
.