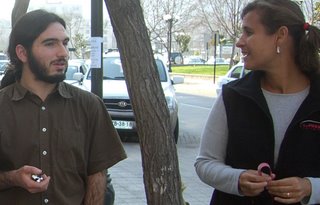 Like half of the children and adolescents in Latin America, Jonathan was born into poverty. He was raised by a single mother (his father abandoned them) in a lean-to made of cardboard in a squatter's camp until Pinochet's soldiers destroyed the camp. He and his mother then moved "up" to a slum.

At twenty-five, Jonathan is a prototype for what we long to see happen in the lives of the youth of the region. He has broken out of the mentality and cycle of poverty but is still willing to serve others with his considerable gifts and talents while developing himself professionally. To an American this might sound ordinary, but in our experience in Latin America each one of the following elements--breaking out of poverty, serving others, and developing as a respected professional--is notable. Finding all three in the same person is truly rare.

In a culture where "servant" is an occupation, the one thing lower than being a servant is being one who doesn't even get paid. Somehow Jonathan has developed a work ethic that transcends this cultural stigma. During the two national youth leaders conventions for we've been a part of in Chile, Jonathan has been always present, always serving. He arrives early and stays late. While other "leaders" his age are sitting around in smart clothing, overseeing the few details related to their official role, Jonathan is helping out whoever and however he can. Throughout the year he serves in his local church as coordinator of the worship team and as youth leader and he supports youth ministry in general as an author, editor and mentor for two youth ministry related web sites.

He has finished an AA degree in Accounting and until a year ago had won a scholarship to study Literature at the best private university in Chile. Then the school had a change in leadership and rescinded all scholarships.

Together with colleagues in Chile, we have been trying to raise the $7500 it will take for him to finish his degree. So far we have $1800.

(NOTE: THIS IS NOT AN OC INT'L PROJECT, BUT WE HAVE FOUND A U.S. NON-FOR-PROFIT ORGANIZATION WHO WILL RECEIVE THE MONEY ON HIS BEHALF). 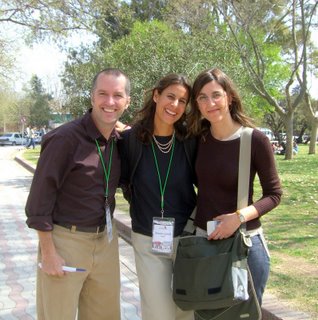 Yesterday morning we arrived home from one of the most taxing, and rewarding, trips we’ve had in a long time. In the midst of the long hours and sometimes frenetic activity there are moments that stick, memories that bring me joy as they come to mind and as we talk about them later.

For example, there was a thirty-something girl sitting in the front row of our seminar “Roots: in depth youth ministry” who was really tracking with us the whole time. Afterwards she came up to me and said, “Thank you so much for this workshop. Where I live in Colombia youth ministry is dominated by large events which focus on the latest “apostle” or charismatic leader. I am the youth pastor at my local church but I had never heard about in depth training for youth ministry. I, we, desperately need this. Please don’t forget about me. If you ever come to Colombia, please get in touch with me so I can get more training.”

I told her that there are plans for a Roots conference in Colombia some time in the next few years, but what is really exciting is that she doesn’t have to wait for the conference. She can enroll in our online courses and start getting trained right now.

The smile on her face and the promise of the difference it can make for the teenagers she ministers to makes the years of long hours and laborious effort on the Roots textbook and animated classes worthwhile.