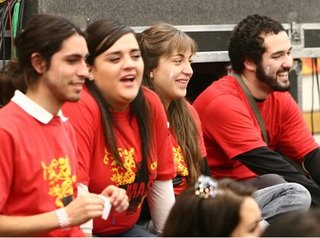 I know you love slideshows... you just can't get enough of those captioned photos of our life. So click here or on the photo above to see our latest creation.

Okay, so maybe you hate them - like our friend, Terence - but we'll never know, so next time we see you just fake like you viewed them.

Hints to help you act like you saw them: there are 31 photos; most of them from our time in Argentina and Chile at the National Youth Leaders Convention, a couple from the air over the snow-capped Andes mountains; a few from surprise birthday parties thrown for Annette (at one she had to eat her cake under the table); and one of me running through freezing cold downtown Santiago de Chile in nothing but an umbrella, a wooden barrel, flip-flops and with hundreds of youth leaders chasing me. 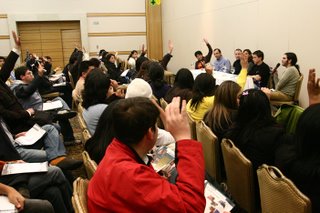 Seven months had passed since we’d been in Latin America, so our May/June trip to Argentina and Chile was a welcome chance to get back in the saddle again. As Tim was planning the trip he found that the ticket was cheaper if we stopped in Argentina on our way to and from the National Youth Leaders Convention in Chile. These stops gave us the chance to meet with people who will play a significant role in the next phase of our ministry and to begin moving our belongings to Buenos Aires.

I just remembered that last year we went to Chile for their 1st National Convention “on the way” to a conference in Bolivia. Some of the Chilean leaders we met then have become such a part of our life that it’s ironic to realize that our motivation last year was to support our coworker Aaron, who had birthed the conference from years of groundwork with youth leaders all around Chile. At any rate, because of our close ties to these Chileans, we gladly accepted when we were invited to lead a workshop at this year’s conference.

Youth leaders have so many needs it was hard for us to land on one we felt we could address in the allotted two hours. My whole life I’ve heard stories from my father, a radiation oncologist, which highlight the importance of a proper, timely diagnosis. In that spirit, we decided to guide the leaders through an analysis of the plan and programs that make up their youth ministry so they could see how well balanced their work is through two different grids: “components of an abundant life” (worship, instruction, service, fellowship—drawn from elements present in the life if the church in Acts 2) and “educational environments” (large group, small group, mentoring, concentrated time, serving together—drawn from how Jesus carried out his ministry). It was fun for Annette to be able to point to the place in the latest Youth Specialties catalogue that has the cover and description of the book she co-wrote which goes into more detail about these points.

Our seminar was held at the same time as seminars given by three of the most dynamic, well known speakers on youth ministry in the Spanish speaking world, so it was encouraging when the doors of the room were opened and we saw that a few people had actually chosen our workshop. We had people ranging from youth pastors with 10+ years of experience to new volunteers with none.

One of the most gratifying moments of the seminar happened near the end as we were debriefing what the participants had learned from their analysis. A 50-something man who was sitting in the back explained that he ran an outreach to teenagers sponsored by the Catholic Church. “I see now,” he told the group, “that we have a strong orientation towards service but we are weak in our Bible instruction.”

A hand shot up in the front. When we called on the 20-something guy who had been typing away at his computer, we were a bit nervous that he might verbally attack the Catholic youth leader. (It's rare in Latin America for Catholics and Protestant to get along in ministry settings.) He began by saying, "Did you say you're Catholic?...because from what I've seen you guys are good at including service as an integral part of youth work.

Traditionally that's not something we know how to do. Could you give us some idea of how you include service as part of what you do with your youth group?” The Catholic leader replied, "You Protestants are good at teaching and studying the Bible. That something we need to learn from you." He then proceeded to describe a variety of ways they involve young people in service to the general community. Everyone listened intently and the laptop user recorded the ideas for future reference. It was a bright and happy moment.

At the end of the seminar thirty six people gave us their email addresses so we could remind them about a web page we had created specifically for them. It's chock full of materials designed to help strengthen any weak areas they might have discerned through the analysis we did in the workshop.

Overall the trip was great. It confirmed our decision to move back into Latin America, specifically South America. Our network of relationships with long-term, committed youth leaders continues to develop and we are excited about being able to offer the growing number of volunteer leaders something more than simply motivation for a weekend.
Thank you so much for your prayer.