What bad luck to lose your sense of smell in Cairo! It's like losing your hearing during a broadway musical or losing your ability to see color in the Louvre.

I got a cold and my nose completely stuffed up on my 2nd day in Cairo. For those of us who have never been to North Africa or the Middle East, the sites and people are exotic - smell or no - but i'm missing all the smells! Sure it came in handy when we visited the awe inspiring "Coptic Cave Church" in the expansive trash dump on the city's outskirts, but it's a personal tragedy for me as i sip on cardomen-spiced Turkish coffee at El Fishawi's a caf� in the open market which has been open 24-hours a day for the last 200 years (at least the texture was interesting). 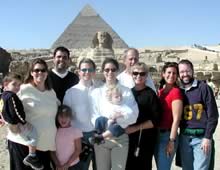 (click photo for larger version)
Everything else is fabulously different and interesting. All 11 of us - including the pair of two year olds - are enjoying themselves. We leave for Addis Ababa, Ethiopia at 11 p.m. tonight and arrive at 3:55 a.m. 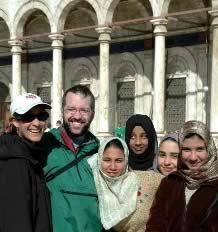 (click photo for larger version)
Seventeen million people living in Cairo {click here for a street photo we took). I think 15 million of them are driving and the other 2 million are running in and out of traffic not seeming to care if the get hit by cars. It's like a video game (but there's no "Reset" button).

Today we get to go to the pyriamids! 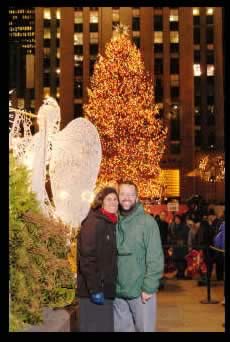 (photo taken at Rockefeller Center)
Tomorrow we leave from JFK airport for the big, non-standard, family Christmas trip to Cairo, Addis Ababa and London. I haven't been able to check email since arriving in the U.S., so i was very happy when Annette pointed out some free-to-use internet connected laptops in a CompUSA store on 5th Avenue, Manhattan. So i checked email (79 new ones) and then thought it would be just too fun to pass up the oppportunity to leave a blog note from the Big Apple.

Were off to see Macy's Christmas window displays. Bye for now.
(Click here for another NYC photo)

We are in the Dallas-Ft. Worth airport in transit from Mexico to NYC where we will meet up with the rest of Annette's family for the rest of the trip to Egypt and Ethiopia. Hopefully we will get to spend Christmas day in an orphanage. We'll do our best to keep you updated (but not bored).

One cultural note after being outside the U.S. for nearly a year, people are bigger than than i remember (bigger vertically, horizontally...) 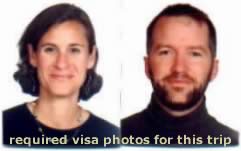 (the beard is temporary, for blending in a bit)
Next week Annette and I are leaving to spend Christmas with Annette's family. Normally that's not particularly newsworthy; however this year the whole clan is setting out on a highly non-traditional Christmas "vacation" (and i used that word loosely). Our destination is so out-of-the-ordinary, that I'm only going to hint at where we'll be on Christmas day. Here goes:

Legend has it that in 850 A.D. a goat herder named Kaldi discovered � in our destination country � what we now know as the modern day coffee plant. Curious, Kaldi wanted to know what could be responsible for the "queer antics of his flock." Fearing his sheep possessed, Kaldi paid close observation from high on the mountain and watched as his herd nibbled red
berries from the branch of a strange tree. When he sampled the berries himself, he felt a surge of exhilaration and rushed to tell the local Imam. That night the two shared a concoction made of the berries, pranced around, and generally got pretty wired on caffeine.

When they finally dozed off, legend has it that Mohammed appeared to the Imam and said the berries enhanced wakefulness � and wakefulness promoted prayer. Prayer, counseled Mohammed, was better than sleep. Sooner than you can say percolate, the Imam and his monastery became famous throughout Arabia for the spirited praying of its coffee-drinking brethren.

Did I Just Sponsor a Skateboard Competition?

(click pic for big version)
Last week when Annette and I were out getting some exercise we happened upon a crowd of skaters (skateboarder) in our neighborhood. I immediately got excited, ask around for the organizers, and asked if they needed anything. They did. They said they needed a sponsor. So i ran home (literally) and got all my old skate paraphernalia: stickers, kneepads, and a few "rails" for doing tricks on...then drove back handed it all over to them thereby becoming this skate competition's sponsor :-)

Now, you may think this all sounds very odd, but you have to understand that 1) skateboards were a big part of my life from 11 to 29 years old, and 2) this is Mexico and sponsors don't always materialize, so you have to learn the art of improvisation. In the end, I also became their official photographer and made some new, young, punk skater friends...and that's not something you get to do every day. (if you're into skating, click here for more photos from the event)