Stuck on a Steep Street 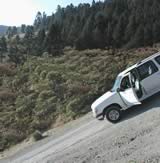 ...at that point, we tried a new plan. This included wading through a pack of mangy dogs to the front of the driveway-owner's house which was festooned with badly stuffed game (owls, rabbits and the like), politely asking if it would be possible to move the jeep, then moving said neighbor's ailing jeep when the man agreed as long as it didn't require him to get out of bed.... [read more here]

At last I got some photos up online from our time in Spain this February. Just click on the link above and choose one of the photo series. We had a fantastic time at our meetings in Spain, especially since we got to stay in the Montserrat monastery. It was like living in a museum... beautiful and fascinating. The photos all have little captions, so you'll get a feel for what we experienced.

How to Combat Corruption When Crime Pays So Well

The joke goes like this: The Mexican politician goes to visit his U.S. conterpart and upon arrival is impressed by the American's hilltop mansion and grounds that include a swimming pool. The Mexican leader comments to his host, "I know how much you earn and it's not enough to pay for and maintain such an place. How do you afford it?"

The U.S. politician smiles coyly, lowers his voice and says, "See that highway over there?" pointing to a nearby road, "ten percent of everything that was alloted for it's construction ended up going into this home."

A few years pass and the corrupt U.S. official goes to visit his Mexican counterpart in Mexico. He arrives at the man's personal airstrip and is astounded at the stunningly luxurious and expansive estate which the Mexican politician is showing him. There are multiple bungalows scattered around a central mansion modelled after Versailles. There is a water park, fountains, and a full size soccer field with stands. The American leader comments to his host, "I know how much you earn and it's not enough to pay for and maintain this exuberance of luxury. How do you afford it"

The Mexican politician smiles proudly, lowers his voice and says, "See that highway over there?" His U.S. counterpart looks in the direction his host is pointing but can't see the highway, "No, i don't see the road." The Mexican says, "That's right... one hundred percent of of everything that was alloted for it's construction...."

Take a look at this article, it gives some background to the "WHY" of corruption in Mexico.

"A Mexican Governor has suspended an entire state police force - all 553 members - after two senior officers were accused of cutting deals with powerful drug traffickers."

Looks like this governor is taking a slightly different course of action than his predecessor. The last governor of this state was kicked out of office for involvement in a kidnapping ring headed up by his "Anti-kidnapping Tsar" (click here for that story). And if this intrigues or scares you, you've got to read this incredible BBC article from April 15th, 2004.

I guess this article explains why our local Sam's and Wal-mart hasn't been carrying it's store-brand dog food which everyone here buys since it's half the price of any other dog food... must be the "mechanically separated beef" in it - yuck.

Ever "heard" silence so absolute that it scares you?
Me neither, but Annette and I just read a fascinating, true story about a girl's travels through the Chernobyl dead zone.

Her motorcycle journey - full of photos and facts - is the most enlightening history of the Chernobyl incident I've ever read.

You must read - if not travel to - Molvania: a land untouched by modern dentistry.

Make sure you don't miss the hilarious subsections like the Photo Gallery.